Summer 2022 was long. Many of us found time to venture out for a fun-in-the-sun family vacation, possibly the first one taken since COVID-19 came into our lives—for some quite tragically, and for others—a real inconvenience to say the least! But the summer months are waning and fall is on the horizon. And as is traditionally true, Americans begin to settle into regular routines again come September. Fall is a time to focus and realign with the things that matter most to us, so September is ideal for the roll out of World Alzheimer’s Month because Alzheimer’s disease is certainly a matter of critical importance to the 5.8 million Americans who struggle with it and other dementia-related conditions. And when you add in the millions of family members, you’ll find that Alzheimer’s touches nearly everyone in America in some way.

Getting to the Truth: What Is Alzheimer’s?

Alzheimer’s disease, or as it is commonly known, Alzheimer’s, is a degenerative disease that affects the brain. Alzheimer’s can have a devastating impact on the brain’s capacity to function normally, producing memory loss; behavioral changes; and interfering with one’s ability to perform even the most basic daily tasks of life, such as dressing, bathing, preparing a meal, or driving a car. Alzheimer’s can develop slowly or it may accelerate rapidly. It tends to appear in the 65-and-over population most often, but that is not a hard and fast rule by any means.

Looking back on the history of Alzheimer’s disease, it was a researcher and pathologist by the name of Alois Alzheimer who in 1906 revealed to the 37th Congress of Psychiatrists of Southern Germany that he had identified a disease that seemed to have a detrimental impact on the cerebral cortex. Recounting his research, Alois Alzheimer provided an overview of this disease and its devastating effects in a female patient by the name of Auguste D. The disease caused her to have disorientation, memory loss, language problems, and hallucinations. Autopsy results after her early demise at just 50 years of age revealed a thinner cerebral cortex, senile plaques, and neurofibrillary tangles—all the signs of what we know today to be Alzheimer’s disease.

To home in on the nucleus of the disease’s existence and function, Alzheimer’s is essentially a disconnect between neurons—nerve cells located in the brain. The human body relies on neurons to send critical messages out to various areas of the brain. Neurons are also responsible for sending important messages to our muscles and organs; it’s an intricate system that plays a vital role in how our bodies function. When Alzheimer’s disease takes hold, it creates an environment in which neurons stray from their primary objectives and malfunction, creating a ‘communication breakdown’ of sorts within the cerebral cortex and the hippocampus which are responsible for our language, reasoning, and behavioral skills.

Alzheimer’s is More Than Memory Loss

While memory loss is likely what most people think of when a loved one or family friend is diagnosed with Alzheimer’s, memory loss is, unfortunately, just the tip of the iceberg. Alzheimer’s can affect judgment, make it difficult to find the words necessary to effectively communicate thoughts or needs, and diminish cognitive functioning. As Alzheimer’s progresses, a sufferer may find it challenging, or even impossible, to perform activities that were once almost automatic, such as driving their car, cooking dinner, managing their bills, or even taking an evening stroll without fear of getting lost. Alzheimer’s can be consuming, and its diagnosis may bring anger, fear, and anxiety as someone begins to feel a shift, or a gradual detachment from their sense of self, their ability to perform tasks, and… their independence. 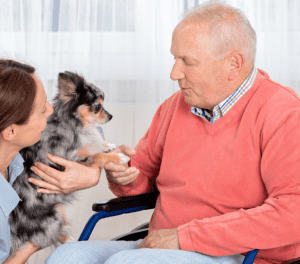 A diagnosis of Alzheimer’s disease is a devastating discovery that affects the entire family. There is a world of information available to you, and much to learn. Here are 5 facts to get you started on your learning journey.

1. There’s an Increased Risk for Black Americans and Women

The research is conclusive and unfortunately older Black Americans are twice as likely to develop Alzheimer’s or other dementia-related/memory loss conditions than their White American counterparts. And women have the highest risk of all to develop Alzheimer’s disease, as the numbers show that nearly two-thirds of all those diagnosed with Alzheimer’s are women.

Research has demonstrated that socialization is crucial for brain health. According to a large-scale study referenced by Harvard Medical School’s Harvard Health Publishing, when a person is lonely, their risk for dementia jumps 40%! Socialization sparks memory and improves neural networks, so living in a vibrant community and actively engaging with friends through socialization is great for your health in many ways. And that’s one of the benefits of living in a vibrant, social community such as The Pavilion at Great Hills.

3. Innovative Treatment Can Slow the Progression of Alzheimer’s

There’s currently no cure for Alzheimer’s, though researchers are making great strides, but new innovative treatments are available that can help to alleviate symptoms in the mild or moderate stages of Alzheimer’s disease. There are cholinesterase inhibitors that work within the brain to prevent, halt, or slow the breakdown of the neurotransmitter acetylcholine, as well as other meds that may help to regulate glutamate levels. Therefore, if you think you’re observing even slight behavioral changes or lapses in memory, etc. in someone you love, see a doctor right away because treatment works best when treatment starts early.

There’s no doubt that music is a rich and wonderful component of our lives. No matter what your choice of genre, music connects us to our emotions and inspires us. But research studies have shown that experiencing music, either through composing/performing it or listening to it, is a beneficial Alzheimer’s therapy that can help support memory and cognitive ability.

5. Over Half of Those Who Have Alzheimer’s are Unaware

Alzheimer’s disease doesn’t always arrive with fanfare, more often than not it starts slowly, with memory loss becoming more advanced gradually. In fact, it can arrive so unceremoniously that more than half of those who actually have Alzheimer’s may not even realize they do, making Alzheimer’s a rather sly invader. But once Alzheimer’s gets its grip, the effects can be dire so watch for signs in your aging family members, such as getting lost in a place that should be familiar, lapses in hygiene, language problems, or memory lapses that seem more intense than the normal age-related memory issues that most people experience after 45 or 50. If you see the signs, or even suspect them, err on the side of good judgment and consult with a physician right away.

The Pavilion at Great Hills is proud to call Austin, Texas home. And as the saying goes, ‘It’s better in Texas,’ and well, we certainly agree! Austin is known the world over for its vibrant arts community, so it should come as no surprise that our Valeo™ Signature Programs at The Pavilion at Great Hills are inspired by the arts community that is Austin, Texas!

At Great Hills, we believe in the power of community—building bridges for continued independent and thriving lives. We’ve built a community that is as diverse and vibrant in its engagement programs as it is in its people, and our curated programs ensure that we honor residents’ preferences and respect their legacy as we explore tailored events and programming designed to stimulate the mind and enhance socialization.

Our Valeo™ Signature Programs are based on scientific research. We don’t provide ‘activities’ or ‘time-passing’ exercises. Every event and engagement program our residents enjoy here at Great Hills has been vetted and researched to ensure that they are not only fun and social, but that they provide real opportunities and benefits, from potentially lowering risks for heart disease, combating depression and anxiety, and boosting cognitive function! Our diverse programs of arts and music, travel time, legacy building, and pet companionship are like no other, and we are very proud of what we’ve created because the results are real! To learn more about our individual Valeo™ Signature Programs, click the link here.

How to Observe World Alzheimer’s Month

Local and federal Alzheimer’s organizations always need money to cover everything from research to basic administrative costs. If you have the ability, donate!

Check with your local Alzheimer’s organizations—many offer instruction and tools that can help you ‘spread the word’ for Alzheimer’s awareness. Remember, over half of the people living with Alzheimer’s are unaware, so it just might be your outreach efforts that help someone get the critical early treatment they need!

Sign up for The Pavilion at Great Hills newsletter and be the first to learn about upcoming events:

There are a lot of decisions involved in choosing an assisted living or memory care community. We’re here to help you find the information you need. Submit a request for more details and we will be in touch shortly.